Who needs the gym anyway?

It has been brought to my attention recently that not everyone who chooses to exercise does so purely for pain, sweat and vanity. 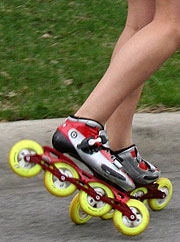 Apparently there is this thing called enjoyment, which is so important to some that they will only exercise if they enjoy it- go figure!

Heck! Some folks even shun the gym culture for other activities, leaving personal trainers and gym bunnies standing by their triple cable crossovers wondering where everyone has disappeared off to...

For those of you who fall within this category of exercise heathens I have put together a list of alternative fitness forms. Those of you who had 'getting fit' at the top of their New Year's resolution list but have yet to make it off the couch as all the options you can think of bore your socks off have no excuse now.

It's as if I'm Goober's Uncle Traveling Matt and you are my little Fraggles.

It's a pretty darn good upper body workout and a great excuse to don high shoes and a pair of shorty shorts.

However there is not much boy action for those who like to combine exercise with dating opportunities, possibly as anatomically boys have more bits to squish if the pole gets in the wrong place!

The ewwhhh factor is at the top end of the skank-o-meter too.

Once the domain of rough and ready Rocky types boxing has found favor with more garden variety folk. It's as if boxing was invented with the lesbian community in mind- short fingernails, daggy boxer shorts… 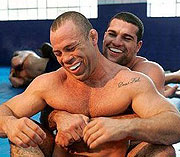 As with pole dancing (although the similarities end there) it's good for an upper body workout and will have the added bonus of a lung stretching cardio session.

If you are a bit scared of punching and kicking a big ole boxing bags then head off to the video shop and you'll find some DVD boxing workout treasures tucked between CherFitness and Jane Fonda.

Fondness for dance started well before Paul Mercurio wanted to dance in the Pan Pacific's.

You can guarantee a cardio workout and some middle-shaping wiggling in almost every style of dance but even better; almost every dance class in every community hall around the country is chock full of folks who haven't done much dance so it's all very inclusive and welcoming. Ballroom dancing ticks all the boxes; a chance to wear a posh frock and imagine you're being swept off your feet by a weather boy.

For the girls there's Roller Derby, otherwise known as meals on wheels. Groups of chicks in very little clothing moving very fast while trying to beat the crap out of each other. Mmmmm, dine in or takeaway?

But really; it's an awesome workout if you're doing it and even more fun if you don't do it and just watch.

Do you want fries with that?

For the boys interested in some roller action then it's all about a disco headband and a long forgotten Xanadu fetish.

It's a great ass workout like derby but without the increased insurance premiums.

Finally, the ultimate in alternative exercise choices for the LGBT folk of NZ.

There's nothing that says 'gay-friendly exercise' than a group of bears chasing a ball around a field wearing bonnets and knee socks pausing only to give each other cuddles.

You're spoilt for choice really aren't you my little fraggles? So even if you are not the gym bunny type then there are plenty of options.

Julz Darroch is a Wellington-based Personal Trainer and Fitness Educatorwith 15 years ofexperience in the fitness industry.

Send your fitness-related questions and personal training enquiries to julzdarroch@actrix.co.nz