A new collection has been published to honour the memory and raise awareness about a man who could be considered New Zealand's own Oscar Wilde, James Courage, our very own gay, but sidelined, literary icon.

In 1959 Courage published the first gay novel by a New Zealander, A Way of Love, which told the story of a relationship between two men.

Though the writer of short stories, plays and novels had been celebrated up till that point, censorship and moral outrage about A Way of Love left him all but eradicated from the public memory.

Hoping to reverse that eradication, and revive Courage's work, are Chris Brickell and his former student Christopher Burke. 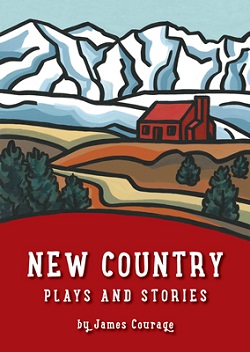 They have joined with artist Nic Dempster, to put together a posthumous collection of some of Courage's plays and short stories New Country.

Christopher Burke says it was Brickell's very ethic that made him move to Dunedin to study under his tutelage.

'I didn't like this idea that there was no history, which some people think or assume. I liked Chris' ideas about kind of disrupting what we think we know ' this assumption that gay identity is just this grand thing which arrives in the 1970s. It is in some respects, but if we just focus on that we obscure a number of important ancestors or archetypes, which feed into who we are today.

'James Courage is important for that. We want to emphasise that he's not a marginalised figure by any means, he is one of the most important writers of his generation.'

An absolute labour of love, New Country is about raising awareness, getting Courage's name out there and recovering his memory.

'Simply put, people don't know about him. And I can't help but think how excited I would have been if I was a high school kid in Hamilton in the mid to late 90s and my teacher was able to hand one of his stories around the class. I would have felt really validated, I think,' Burke says.

Christopher Burke grew up surrounded by books and has always loved literature, particularly the New Zealand voice. He majored in New Zealand literature at Waikato University, and though he'd heard of gay local writers they were modern ones, like Peter Wells and Witi Ihimaera. He was aware of the brief gay subtext in Frank Sargeson's work, but that was it.

'I wanted to know who else was out there - and if there was anyone out there. I discovered James Courage mostly by accident. It was tracing Frank Sargeson's wider cohort, reading his biographies and autobiographies, to see who he was hanging out with. A bit like you might do on Facebook, right?' he laughs.

He found out that if Frank Sargeson was friends with a male writer, they were probably gay, and as he looked deeper he was surprised by the number of writers who were penning forthright stories about sexuality.

'It was an explosion for me, in my mind, to discover that not only were there writers out there, but there was a huge amount of them, very active literature, in a period we've assumed must be completely silent.'

Burke says James Courage stood out 'he published New Zealand's first gay novel, and first gay short story (Guest at the Wedding, from 1953, and included in the newly-published collection).

He also wrote gay plays while in London in the 30s, and a further play with gay content set in Canterbury in the 1920s.

'The more I dug the more fascinated I became,' Burke says, explaining Courage was part of his Master's thesis about gay writers of the period. His PhD was then devoted to recovering the writer's work and story. He was able to access 12 of his diaries, recently released from embargo.

About James Courage: a brief bio

Courage was born into a Christchurch sheep farming family in 1903 and grew up in New Zealand before going to Oxford in 1923.

He spent much of the rest of his life in Britain, surrounded by other New Zealanders, and published his first novel One House in 1933.

Courage went on to write numerous short stories, plays and novels. While he had been celebrated at home, things changed after the publication of his ground-breaking 1959 novel A Way of Love, which is about a young man's relationship with an older man. It was censored, and available to very few New Zealanders.

James Courage died in Hampstead on 5 October 1963, and his ashes were returned to New Zealand and scattered at the mouth of the Waipara River near Amberley.

Courage revelled in his sexuality

Courage travelled the world, and spent many years writing from London, but Burke says he remained a New Zealander in every sense. 'He lived in London, but he was absolutely surrounded by New Zealanders. Most of his time was spent with New Zealanders.' People like Janet Frame were among those who popped up in his life.

'And he had a vibrant love life. He had a significant partner he met in his 20s' they pursued a relationship for decades, despite the fact this man moved to Argentina. He pursued him to Argentina, quite romantically. Just gets on a boat one day and decides he will not let him leave!

'He revels in sexuality, in his own sexuality and his own body, and you see that in these stories too' an appreciation for the physical form.'

New Country unfolds in a cabin in a rural hinterland. 'It's effectively the closest thing to Brokeback Mountain which we have,' Burke says. 'It's so refreshing to read something from an authentically New Zealand time and space, and one which for him is completely taken from his own experience.'

Courage's entirely autobiographical 1954 novel The Young Have Secrets was about his quest to understand his own identity, and was incredibly successful in the 50s. The writer had been celebrated by Christchurch newspapers as the 'son of Canterbury', until he published A Way of Love.

Burke says that novel came with professional and personal fall out, which the Courage took hard. 'Essentially it eradicated him from all public memory. Something similar happened to Oscar Wilde.

'In many respects I see Courage as New Zealand's Oscar Wilde. Not just in the sense that he so wholly embraced his identity in literature, but also for that kind of backlash happens when the public scandal about his identity breaks out. It's such a shame. But that's why these kinds of projects are so important. The exposure of an authentic, provincial queer space where men and women were able to socialise and form intimate relationships relatively openly. It flies in the face of everything we think about so called 'provincial New Zealand'.'

Burke says it shows us there are forebears. That there are people who lived and loved as queer people, throughout generations. He says we should honour their memory, and revel in the fact they existed. 'Yes read Oscar Wilde, but why just read him, when you can enjoy the best that New Zealand has to offer?'

Burke and Brickell published the collection because while they had appreciated Courage for so long privately, they wanted to honour his memory' and spread the word.

'Together we have produced something which I am absolutely sure James Courage himself would feel is worthy of his blood, sweat and tears,' Burke says.

The collection is just an appetiser for a much wider main course which Burke and Brickell hope to publish over the next few years.

You can buy a copy of New Country here