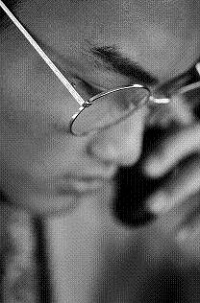 In Jern Siong's The Call, a young gay man who fled home gets a phone call from his estranged religious father, who has some major pieces of news. Is there peace to be found?

Hey, son! About time we talked, don’t you think?

Dad, you know how much I hated that small town where we lived. The feelings were pretty mutual back then.

Come on, son. You know it wasn’t for no reason you and your friends couldn’t get along.

Oh, so it’s my fault then? Great, dad, calling to tell me that I’m a jerk. What else is new?

You haven’t exactly been a … well, friendly kid back then. Can’t blame others for what you did to yourself.

Why don’t you try being friendly to a group of kids who kick your butt into the dirt every day?

I’m sure it wasn’t that bad. After all, the teachers wouldn’t have allowed anything to happen.

Dad, the teachers hate me too, remember? All that crap about me ‘straying from the path of the righteous’ and ‘mixing with a bad crowd’ pissed the hell out of me.

Well, you were a bit of a troubled kid, disobeying orders and never finishing your homework.

I was busy surviving high school, dad. That place was a freaking nightmare.

One wrong move, and you’re screwed.

I went to the same school when I was your age, and it was pretty fun.

You were the jock, dad. I was the kid everyone pisses on.

Maybe if you weren’t so… flamboyant, people might have left you alone.

That’s who I am, dad. I can’t change who I am. But nobody understands that. Even you and mum think I’m twisted or something.

Son, guys your age spend time playing football and hanging out with girlfriends. They don’t….

You spent entire days singing along to songs from Grease and Cats. What was I supposed to think?

That I liked musicals? Why don’t you try that for a change, huh, dad?

Oh my God, I can’t believe you’re telling me this crap. There’s nothing wrong with the way I behaved.

Son, of course there’s something wrong. You’re a guy, and guys don’t act like that.

How the hell do you know how guys are supposed to act? It’s not like it’s written in stone or something.

It’s in the Bible, son. Maybe if you’re not so busy you could try reading it.

Read something that tells me I deserve to burn in hell? No, thanks.

But if you repent, and accept God’s love, you can be in heaven with us! Think about how sad we’ll be if you weren’t there.

Technically, if you’re in heaven, you should be happy. If you’re sad, it defeats the purpose, doesn’t it?

Dad, you still there?

Yeah, just thinking about what you said.

Well, about that… she isn’t exactly hale and hearty, but she’s hanging in there.

Hanging in there? What the hell are you talking about?

She had a stroke last year, and I tried to call you, but you never picked up….

My nose is runny. Wait a minute.

What happened after that?

Well, she was hospitalised for a couple of months, and during that time, she kept asking for you, but no one knew where you were.

She got better after a while, but we’re keeping her health in check. Can’t be too safe nowadays.

You know, even after all those fights back then, I still cared about her. But she didn’t give a damn about me.

She did, son. She just didn’t want to show it. When you left, it pretty much broke her heart. She cried for days, and when she wasn’t crying, she was walking around the house like a zombie. She kept saying that she failed as a mother.

Well, she sort of did. Mothers were supposed to love their children no matter what, and she pretty much failed on that part.

Don’t put the blame on her. She has strong values, and you can’t expect that to change overnight.

I waited seventeen freaking years for her to change. That’s not overnight.

I think what tipped her over the brink was the night you left. Remember that?

Yeah. It wasn’t pretty, was it?

No, son, it sure as hell wasn’t. We were all screaming at each other, and after a while, you announced that you were leaving. I swore that when you walked out that front door, I felt sure as hell you were going to come back. You always did before. But that time, you didn’t.

I slept in the park that night, dad. I knew I couldn’t possibly go back again, so I hitchhiked, got a job, moved around for a while. Then I met someone. We were cool for a while, but then he broke it off.

So I bunked around at friends’ for a while until I got enough money for an apartment. It wasn’t much, but at least I had someplace I could call home.

Well, you could’ve come back here.

And what? Start another row? No dad, I’ve had enough with that place. At least out there, I had some peace of mind.

So you’re still staying in that apartment?

What, now? Hell no. Left that place ages ago. Moved in with someone.

Still that way. Yes dad, I am, and I can never change.

But how do you know that?

But I don’t understand.

I don’t wanna talk about this. The last time we did, it ended in a fight, and I doubt you called me for that. How’d you get my number anyway?

A friend of yours passed it along. Took me a while to convince him, but I finally did. The thing is, son, your sister is getting married. And she’s hoping that you could come to the ceremony.

Oh my God, Ella’s getting married? Who is it?

Some guy she met at her workplace. Name’s Rich. Nice guy, treats her well and all that. But most importantly, mum likes him. She thinks he’s a ‘true gentleman’.

Unlike me, I suppose.

Hell yes I am! I love Ella, and I’m definitely going to be there on her big day.

There’s one more thing. Can you… not bring anyone?

What? I can’t even bring my boyfriend to my own sister’s wedding? Who the hell said that?

Son, let’s try to work things out here. Our relatives would freak if you walked in arm-in-arm with another guy.

Who cares? Definitely not me.

But it’s your sister’s wedding, son. Don’t ruin it for her. She’s been planning it for months, and she really wants to see you again. Please, work with me.

Hmm… all right. But remember, I’m doing this for Ella, not for any of those snotty, stuck-up bastards we have for relatives.

And I’d appreciate it if you don’t take off immediately after. We’d all like to spend some time with you. It’s been a long time, son.

We’ll see how it goes on that day. When’s the wedding, anyway?

I know. This is a pretty short notice, but I really hope you can make it.

Well, it shouldn’t be a problem. I’ll have to cancel a few plans, but Ella trumps anyone else in my life.

She’s the only one who remained supportive throughout all those years. Damn, I miss that girl.

You’re going to be seeing her pretty soon, son. And the rest of us old folks as well.

Hey, dad. I got to go. There’s some work I have to finish. See you Saturday.