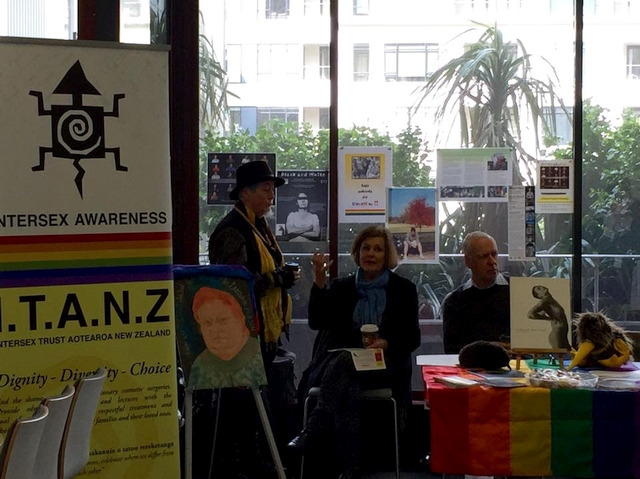 End the shame secrecy and unnecessary cosmetic surgeries. Provide education, workshops and lectures with the goal of ensuring appropriate, respectful, treatment, and choices for all intersex people their families/Whānau and loved ones.

Will celebrate our two decade Anniversary in 2016

The state of being born with a combination of characteristics (e.g. genital, gonadal, and or chromosomal) that are typically presumed to be exclusively male or female.

There are at least 30 different medical conditions.

At least one person in every 2000 live births are born with these variations/traits.

(About the same incidence as people born with red hair)

Raises Awareness in New Zealand Aotearoa. Attends conferences. Does media interviews, produces brochures, and has been involved in the production of a number of documentary films. (Including the critically acclaimed film intersexion).

Has been involved in a number of international gatherings that have sort to rectify justice issues and improve the human rights of intersex people.

We provide training for service providers.

What does ‘intersex’ mean?

Intersex people are born with sex characteristics (including genitals, gonads and chromosome patterns) that do not fit typical binary notions of male or female bodies.

Intersex is an umbrella term used to describe a wide range of natural bodily variations. In some cases, intersex traits are visible at birth while in others, they are not apparent until puberty. Some chromosomal intersex variations may not be physically apparent at all.

According to experts, between 0.05% and 1.7% of the population is born with intersex traits – the upper estimate is similar to the number of red haired people.

Being intersex relates to biological sex characteristics, and is distinct from a person's sexual orientation or gender identity. An intersex person may be straight, gay, lesbian, bisexual or asexual, and may identify as female, male, both or neither.

Because their bodies are seen as different, intersex children and adults are often stigmatized and subjected to multiple human rights violations, including violations of their rights to health and physical integrity, to be free from torture and ill-treatment, and to equality and non-discrimination.

It has become common practice to subject intersex children to unnecessary surgical and other procedures for the purpose of trying to make their appearance conform to binary sex stereotypes.

These often irreversible procedures can cause permanent infertility, pain, incontinence, loss of sexual sensation, and lifelong mental suffering, including depression. Regularly performed without the full, free and informed consent of the person concerned, who is frequently too young to be part of the decision-making, these procedures may violate their rights to physical integrity, to be free from torture and ill-treatment, and to live free from harmful practices.

Such procedures are frequently justified on the basis of cultural and gender norms and discriminatory beliefs about intersex people and their integration into society.

Discriminatory attitudes can never justify human rights violations, including forced treatment and violations of the right to physical integrity. States have a duty to combat harmful stereotypes and discrimination, rather than reinforcing them. Such procedures may sometimes also be justified on the basis of alleged health benefits, but these are often proposed on the basis of weak evidence and without discussing alternative solutions that protect physical integrity and respect autonomy.

Unfortunately, such beliefs and societal pressures are often reflected by doctors, as well as parents of intersex children, who may encourage and/or give their agreement to such procedures, despite the lack of medical indication, necessity or urgency, and despite the fact that such procedures may violate human rights standards. Agreement is frequently given in absence of information on the short and long-term consequences of such surgery and lack of contact with peers, including intersex adults and their families.

Many intersex adults exposed to such surgery as children emphasize the shame and stigma linked to attempts to erase their intersex traits, as well as significant physical and mental suffering, including as a result of extensive and painful scarring. Many also feel that they were forced into sex and gender categories that do not fit them.

Given their irreversible nature and impact on physical integrity and autonomy, such medically unnecessary, unsolicited surgery or treatment should be prohibited. Intersex children and their families should receive adequate counselling and support, including from peers.

Health-care professionals often lack the needed training, knowledge and understanding to take into account the specific health needs of intersex persons, provide appropriate healthcare, and respect the autonomy and rights of intersex persons to physical integrity and health.

Some intersex people also face barriers and discrimination if they wish to or need to amend sex markers on birth certificates and official documents.

Intersex athletes face a specific set of obstacles. There have been several cases of female intersex athletes who have been disqualified from sports competitions on the basis of their intersex traits. However, being intersex of itself does not entail better performance, whereas other physical variations that do affect performance, such as height and muscle development, are not subjected to such scrutiny and restrictions.

Intersex people should be protected from violations of their rights. Whenever such violations occur, they should be investigated and alleged perpetrators prosecuted. Victims should have access to effective remedy, including redress and compensation.

Intersex people should also be consulted in the development of legislation and policies that impact on their rights.

In 2013, Australia adopted the Sex Discrimination Amendment (Sexual Orientation, Gender Identity and Intersex Status) Act – the first law to include intersex status as a stand-alone prohibited ground of discrimination. The Australian Senate has also carried out an official inquiry into the involuntary or coerced sterilization of intersex people.

You, your friends and other individuals can make a difference too: