His friends have known he's gay for ages, but 26-year-old Aucklander Andrew is uncomfortable with the idea of telling his folks about it.

He tells his story below, and Rainbow Youth's Tom Hamilton offers his thoughts about coming out to your loved ones. 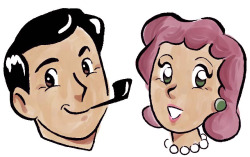 I can remember the first time I came out of the closet to someone.

I was driving through Newmarket talking with a friend about something or other and it just casually got slipped into the conversation. She had a fair idea already so looking back on it with a more knowing eye I realise it wasn't such a huge deal. At the time though, to actively come out and say it was certainly a big deal. I remember the following day waiting to be assaulted by mobs with pitchforks and flaming torches... unsurprisingly that never happened.

Since then, like most gay and lesbian people, I've come out on a semi-regular basis to a whole lot of people. Sometimes it's direct and early on in meeting them, sometimes I just let them make their own assumptions and simply act like myself (which, depending on the day, can be a complete giveaway anyway). These days I'm pretty comfortable with my sexuality. If people have a problem with it, for the most part it's exactly that, their problem. It's a rare thing for me to encounter any negativity regarding it. There is still however one hurdle I have yet to leap. I'm 26 years old, and have not yet told my parents.

Most people find this baffling. The question they always ask first is "how can they not know!?" The answer to that is (at least in the last year or so)... they probably do, we just have never discussed it. People then always want to know why. Is it because I'm scared? Is it because I don't get on well with them? Is it because they are staunch religious types who will send me away to be de-gayed even!?

I get on very well with my parents. They are fantastic people and I have a great relationship with them, particularly my mother. I chat to them on the phone frequently, and go out to visit them fairly regularly as well, so no problems there. They aren't religious, so I won't be bundled off to have the gay prayed out of me if I tell them. About the only thing my mother would be sad about was that I clearly would not be about to father her some grandchildren (she's a very maternal woman). So it does beg the question as to why I haven't just come out and said "I'm gay."

There isn't really a definitive answer other than that I am just not ready to do so yet. There is a degree of fear involved. I have always found it incredibly easy to tell someone I've just met, but my older friends were a lot more difficult to come out to (when I told one of my oldest friends, I effectively chickened out and we then had to sit awkwardly through the second Harry Potter movie with two other friends and then have a very frank text message conversation later that evening). I understand that the fear is completely irrational. The worst case scenario is they are going to blow up about it and it's going to turn into a coming out horror story. I'm scared about that in the same way I'm scared about one of Auckland's volcanoes erupting. It would be very bad, but it's got almost zero chance of happening.

I often hear from people that coming out to their parents was one of the best things they ever did. I will probably feel the same way when I do so. And I will do so, when I'm good and ready. In the meantime, I'm happy with the way things are.

Coming out to someone who is an integral part of your life can be difficult no matter how old you are or how long you have been aware of your own sexuality.

We live in a world that assumes we are all heterosexual and are all happily going to follow the specified standard model introduced to us through social interaction or role models all our life. As GLBTTFQQI identified people it can be difficult to figure out how to come out. It takes stages, we come out to ourselves and then someone we trust who may be a sibling, parent, uncle, aunt, friend or partner and then we face the world.

In some circumstances it can take family some time to understand and work through myths and assumptions about our communities, culture and lifestyle. So be prepared to speak openly about some more intimate aspects about your life, prepare to assure your family that this choice is yours. If you find you lack support or understanding and you are new to coming out, seek support through your local queer orgs.

And remember DON'T bottle up your feelings, seek counseling if you need it, sharing your fears or doubts helps to steer clear of any depressive feelings that can lead to unclear thoughts and a lack of self awareness.

Coming out takes time, but the largest barrier is self doubt. Many of us have the story of the one person we expected to receive the news badly who was fine or those who we tell and are greatly relieved because they have wanted to let us know they have understood for a long time but were worried about sharing it with us when we had not come out to ourselves yet.

What's that corny saying - 'sharing is caring'… but taking the time to understand yourself first is a good start.