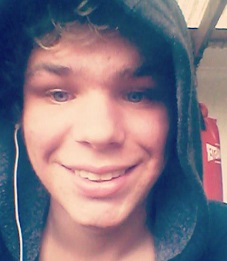 All my life I've been bullied and teased and beaten up because I'm different. All through primary schools and college.

It all start when I start at school in 2000 in Darwin, Australia. I was beaten up because I wore glasses and I got called 'four eyes'. It hurt and kept hurting me, till I moved to another school.

I thought it all had stopped but I was wrong. It started again and I cried and I didn't want to go to school any more because of the bulling and teasing. But I dealt with it, and kept going.

Then I moved to Sydney, Australia, where I found some amazing life-long mates who loved me for who I am. I still got bullied sometimes but it slowed down.

In 2006 I moved back to New Zealand and I couldn't make any friends. I cried and cried because no one liked me. I tried making friends yet I couldn't and so I started depending on myself and no one else. I started doing things for myself and not worrying what other people thought or wanted me to do.

Then I moved up to Morrinsville. I got bullied all the time while I finished primary school and got my glasses snapped. And the school I was at didn't do anything about it. I was scared to go to school. But I always went.

In 2009 I started at Morrinsville College and I got beaten up and the school didn't do anything about it. I was teased called names like "fag, gay" and many more.

One day I stopped talking to people. I bottled it all up and I just wanted to get out some how and I started to self harm and I couldn't tell any one because I would get judged.

I needed help but I didn't know how to ask for it. I moved up in college and I finally came out that I was gay in 2011. From there on the bullying became a daily thing and I told the teachers and DPs and they wouldn't do anything.

It got to the stage where I wouldn't ever go out of the classroom, I was that scared.

In the start of 2013 I got diagnosed with Bipolar Depression. It hit me hard and I got teased and mocked because of it.

I got my NCEA and I decided in 2013 to leave college as I wasn't going to get anywhere. I started to look for a job to help support my mother as my father decided to leave and be with a 25-year-old. But I was unsuccessful. I kept looking and trying.

But I decided to enrol in a Wintec Course and start to train as a chef to get my dream and to make it happen.

Harley says while he knows what it's like to be at rock bottom, he made it through. When he feels like crap, he gets up and does what he loves - cooking. Thanks for being so brave and telling your story Harley. We hope you become an amazing chef!