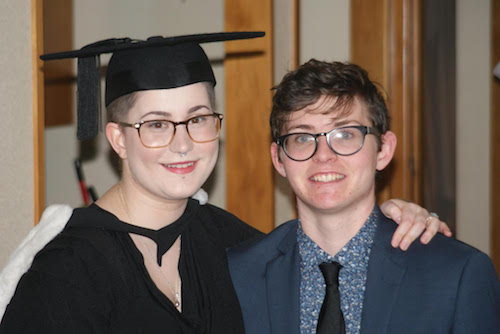 What does advocacy and/or activism mean to you?

I just recently finished a paper at uni about transnational activism (shout out to Dr Greta Snyder) because of this I have a wide definition of advocacy and activism and to me they are the same thing. I think activism is an individual or a group of people working together on a common cause. This could be projects like lobbying the government through protesting or going to select committees. Or it could be writing about issues and solutions to issues and creating alternative support systems in our daily lives.

How did you first become involved in advocacy and/or activism and what kind of work do you do?

The first sort of thing I was involved in was the environmental group at my primary school and I went on to run an environmental group at my high school. Currently I'm a facilitator for Tranzform, a support group for gender diverse youth. I also run the Wellington Binder Exchange, and I regularly write forSalient, Victoria University's student magazine about trans issues.

What issues are you most passionate about?

There are two core areas that I'm interested in - the first is increasing the rights of transgender people to free and accessible healthcare. Secondly, I am passionate about economic inequality and creating an economic system that is more fair for everyone.

How do you see these issues being addressed - what needs to change?

In terms of transgender healthcare, there needs to be an increase in the awareness. We need to challenge the narrative that treatment of gender dysphoria is cosmetic. There also needs to be increased choice for trans people in terms of available pathways to transitioning, and a big part of this involves the Ministry of Health listening to trans people themselves, and creating policy that reflects the diversity of the trans experience. There isn't one singular way to transition.

We need to directly lobby the Ministry of Health and DHBs to make trans healthcare a priority. A big part of this is about collecting data on trans people that shows that providing state-funded medical and surgical transition is cheaper than the costs to trans people and society in general when the state does not fund these procedures. This is something I'm going to consider during my Honours year.

How do you think activism has changed over the years and what does it look like today?

There has been a general move away from protests as an effective force within activism. While they are important for consciousness raising efforts, social movements need to go beyond them to be successful. Social media has become an important tool for activists. The other major change is there has been an explosion of NGO and activist organisations. This has led to a much wider variety of issues gaining traction in the public sphere. Lastly, there has been a movement away from class politics towards identity politics as the basis of social movements, and as a result class and economic inequality have garnered less attention within activist circles.

What is one thing that you have learned from your activism or advocacy work?

The importance of networks of people and community. Neoliberalism pushes the ideas of individualism and makes people feel like the struggles they are facing are for them alone. Through creating networks and connections with people, it is easier to forge realistic solutions to social issues and realise that many people are facing the same reality as you.

Who inspires you to keep going?

Many things. Evolve Youth Service, the work Dr Dylan Taylor has been doing to set up ESRA and Counterfutures, other groups such as JustSpeak, The New Economics Foundation, Dr Greta Snyder, Marion Wood and Jim Kebble the founders of Commonsense Organics. These groups and individuals are all promoting a better way of being, and trying to find solutions to social issues that are affecting so many New Zealanders

What would you say to anyone who is wanting to make a difference in their community but doesn't know where to start?

Reach out to those around you. There will be an organisation that is promoting the ideas the align with your beliefs. If you can't find one, then create it. Community is the biggest thing for activists. The fact that there are others like you who are fighting the same fight is incredibly uplifting. You are not alone. There will be someone else out there that is interested in the same activist work as you.